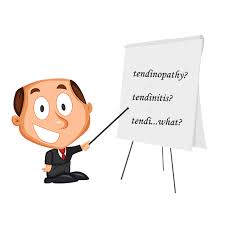 Tendinopathies are problematic to manage clinically. People of different ages with tendons under diverse loads present with varying degrees of pain, irritability, and capacity to function. Recovery is similarly variable; some tendons recover with simple interventions, some remain resistant to all treatments. (Cook&Purdam 2009)

In addition to the primary load-bearing part of the tendon, there is an extensive network of septae (endotendon), where the nerves and vessels are mainly located (Scott et al. 2015).

Patients with tendinopathy display tendons that are thicker, but with reduced energy-storing capacity, meaning that for the same load, their tendons exhibit higher strains than those of healthy individuals (Scott et al. 2015). This represents a decline in both the structural and material properties of the tendon tissue. Indeed, abnormal tendon histology is correlated with reduced load-bearing capacity (Scott et al. 2015).

Cook&Purdam in 2009 proposed that there is a continuum of tendon pathology that has three stages: reactive tendinopathy, tendon dysrepair (failed healing) and degenerative tendinopathy (tab 1). The model is described for convenience in three distinct stages; however, as it is a continuum, there is continuity between stages.

This classification, however doesn’t consider pain since research of imaging evidences that: 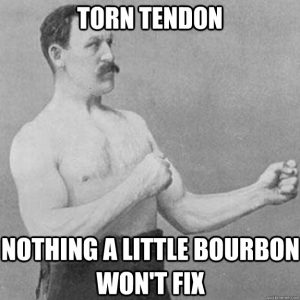 Increased vascularity has been reported to be a source of nociception in tendinopathy. Nerves, and receptors such as adrenoreceptors, are found in vessel walls in tendinosis and are likely to be associated with angiogenesis and blood flow rather than having any role in nociception (Ohberg et al. 2001). However, neovascularisation has been associated with degenerative tendinopathy but is not a feature of early pathology, such as reactive tendinopathy (Rio et al. 2014).

Increased lactate lactate, due to a predominant anaerobic metabolism, occurs in tendons of older people as well as tendinopathy (Alfredson et al. 2002). Accumulation of lactate and decrease of pH has been associated to pain in skeletal muscles and intervetebral discs and could be a possible source in tendons too (Rio et al. 2014). A decrease of the extracellular pH influences the expression of acid sensing ion channels (ASICs); ASICs are activated quickly by hydrogen ions and inactivate rapidly despite continued presence of low pH, exhibiting features of saturation (Kellenberger et al. 2002). This saturation phenomenon could explain the tendon warming up response (Rio et al. 2014)

Other ion channels in tendons such as the stretch-activated ion channels (SAC), voltage-operated ion channels (Wall et al. 2005) or other mechanically gated channels may be implicated in nociception sensing and transmission. Activation of SACs would fit the load based on/off nature of tendon pain and the clinical observation that pain gets stronger with

increased loading (which would correlate with increased channel activation) and the ‘warming up’ phenomenon as ion channels become saturated (Rio et al. 2014).

Despite all this “local” possible nociceptive inputs tendon pain could centralise but pain doesn’t spread and is load-linked. Bilateral pain is frequent and CNS neuroimmune mechanisms offer an explanation for this mirroring.

Simpathetic nervous system could play a role as well, since SNS markers was seen in abnormal tenocytes from painful tendons (Jewson et al. 2015).

Theoretically, in reactive tendinopathy (as described by Cook & Purdam in 2009) there may be increased expression of nociceptive substances because of cell activation and proliferation, but no change in innervation (Rio et al. 2014).

In degenerative tendinopathy there may be little expression of nociceptive substances due to cell inactivation or death but greater innervation (Rio et al. 2014).

The pain-free tendon may have substantial matrix disorganisation and cell compromise, but insufficient production of nociceptive substances and/or the neural network to reach a threshold to cause pain (Rio et al. 2014).

Tendon pain serves to protect the tendon…spinal nociceptors are just only one contributor to this evaluation and research on pain suggests that higher centers can target local tissues if brain concludes that they are in danger (Rio et al. 2014).

The management of tendinopathies requires unavoidably to load the tendon, but when, how much, with what frequency and volume and in which modality?

The keystone to manage these patients, usually younger atheltes, with swollen tendons and some inflammatory reaction on course is the appropriate management of load reducing impact of offending activities (Cook & Purdam 2009; Vicenzino 2015).

Tendon response in type 1 collagen precursors peaks around 3 days after a single bout of intense exercise, suggesting that time interval for adaptive response is an important factor (Cook & Purdam 2009).

Tendon load without energy storage and release, such as cycling or strength-based weight training, can be maintained, as this is less likely to induce further tendon response (Cook & Purdam 2009).

ISOMETRIC CONTRACTIONS: recent evidence shows that high-load isometrics may relieve pain and, as such, may be good to implement early in the rehabilitation program. In the early acute painful stages of insertional tendinopathies in particular, isometric and isotonic exercises should be performed in positions that do not compress the insertion (Rio et al. 2015).

Treatments that stimulate cell activity, increase protein production (collagen or ground substance) and restructure the matrix are appropriate for this stage of tendinopathy (Cook & Purdam 2009).

Passive management such as frictions and extracorporeal shock wave therapy has been showed to be less effective than exercise and not superior to placebo (Cook & Purdam 2009; Capan et al. 2015; Scott et al. 2015).

For Achilles tendinopathy patients the 12 weeks protocol by Afredson could be recommended (Alfredson et al. 1998).

Eccentric exercises are effective for upper limb tendinopathies, but its superiority against other methods is not totally clear (Ortega-Castillo & Medina-Porqueres 2016).

These patients may have difficulty grading activation of their rectus femoris muscle in functional tasks and may overshoot or undershoot recruitment compared with task demands probably because of cortical inhibition and/or increased corticospinal excitability (Rio et al. 2015).

While there was increased cortical inhibition altering motor drive in patellar tendinopathy, there was also greater corticospinal excitability CSE) than in controls inferring differences in the balance of excitability and inhibition of motor control as compared with healthy controls (Rio et al. 2015).

People with patellar tendon abnormality (pathologically observable on ultrasound) have demonstrated landing patterns different from those of controls and importantly, have less variability in movement than healthy controls (Edwards et al. 2010). Movement variability is thought to minimise load accumulation in a specific region and reduced variability may be observed in, for example, reduced coefficient of variation in knee joint angles during a landing task (James et al. 2000). The invariable motor pattern implies that corticospinal control is altered in some way and may be due to protective strategies underpinned by evaluative processes relating to the consequence or meaning of the motor task (Rio et al. 2015).

IS THERE ROOM FOR MANUAL THERAPY?: CAUSATIVE FACTORS

It is easy to understand that tendons may become painful after familiar activities (eg, running, pitching) performed in excess, overloading the tendon (overuse). However, it is less clear whether this scenario is strictly related to tendon overload or whether degradation in quality of motion may also be a causative factor.

Perhaps suboptimal motion quality is partly to blame. Tendinopathies are often placed in the overuse category, but it may be just as important to consider the causative factor of “wrong use.

Movement strategies and variability can provide insight into causative factors and may have broad application to most, if not all, tendons that develop tendinopathy.

The assessment of movement strategies can provide insight as to why some tendons develop a painful tendinopathy. Movement should be analyzed at the joints directly related to the tendinopathy, and at the associated joints and trunk (Malliaras et al. 2015; Michener et al. 2015).

Manual therapy techniques delivered to remote anatomical regions of the body may contribute to and be associated with a patient’s primary report of symptoms (Sueki et al. 2013). “Regional interdependence” is the term that has been utilized to describe the clinical observations related to the relationship purported to exist between regions of the body, specifically with respect to the management of musculoskeletal disorders (Sueki et al. 2013). Many mechanisms has been considered to explain these clinical observation such as biomechanical models (Steindler 1955), combined biomechanical and neurophysiological mechanisms (Bialosky et al. 2009) and biopsychosocial considerations (Main et al. 2000). For instance the usefulness of manual therapy interventions towards cervical and thoracic spine for shoulder problems has been observed (McClatchie et al. 2009; Peek et al. 2015; Pheasant 2016), towards cervical spine for epycondilalgia (Vicenzino et al. 2001).

Last but not least manual therapy could be a valuable differential diagnosis tool to differentiate between “true tendinopathies” and other source of symptoms. For instance Maffulli et al. 1998 found that sciatic nerve irritation may be associated with Achilles tendon rupture and sural nerve symptoms could be difficult to differentiate from Achilles tendinopathy (Cook et al. 2002). Radial nerve involvement in lateral epicondylalgia has been, as well, hypothesized (Vicenzino et al. 1996).

In conclusion the management of tendinopathy is complex and requires thorough assessment of musculoskeletal, neural nociceptive inputs as well as potential central mechanisms. Exercises appear to be the mainstay of management, but training parameters such as type of contraction, intensity, frequency and volume must be carefully adapted to the patient. Last but not least contributing factors and other possible sources must be addressed and represent a significant aid to full recovery.