T4 syndrome – examination, treatment and an update of the literature 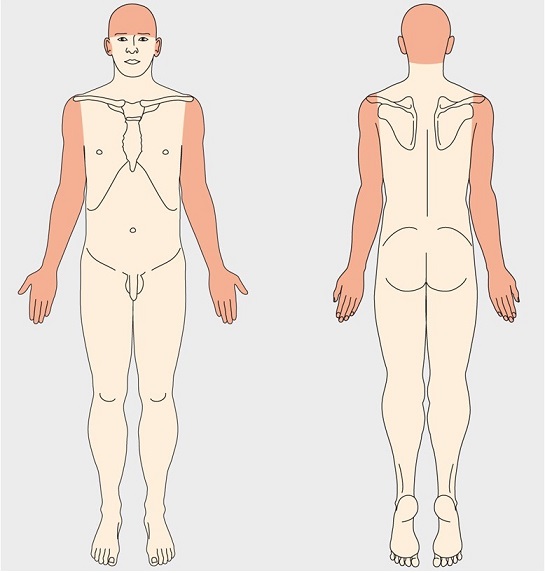 „Do you feel any discomfort in your hands?“

„Yes. Sometimes i have a strange feeling in my fingers, like wearing gloves“

„In a single finger or more?“

„I feel it in every finger and my whole hand“

In our daily clinical setting patients sometimes present with a change of their sensory sensation in the upper extremity. And sometimes the features do not fit for a cervical radiculopathy or an involvement of a peripheral nerve (for example symptoms in the whole hand and not due to a dermatome or in relation with a peripheral nerve). That is the time when we have to think about other mechanisms as potential contributers to these symptoms like a thoracic outlet syndrome (TOS) or an autonomic dysfunction of the sympathic nervous system (SNS). A well-known pathology combining symptoms in the hands of a patient and a dysregulation of the SNS is the so called T4 syndrome.

The T4 syndrome was described for the first time by Maitland and McGuckin in 1986 [1, 2]. It is described as a collection of symptoms resulting from autonomic dysfunction from the upper thoracic spine. These symptoms can occur at the location of insult as well as the occiput and either contralateral, ipsilateral or bilateral upper extremity. Below you can get an impression of different areas that can be described by patients with a T4 syndrome (with kindly permission by Georg Thieme Verlag Germany to use them!!)

But how can the thoracic spine be also responsible for symptoms in the hands AND the head? 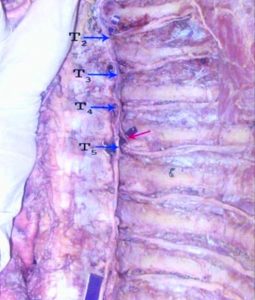 The sympthatic paravertebral ganglia in the thoracic spine are located directly in front of the costovertebral joints [3, 4]. The sympathetic innervation of the head and the hands overlap at the T4 level [5]. Because of the high mechanical sensitivity of the sympathic ganglia in the thoracic spine [4], this area could be a responsible contributer for head and hand symptoms. But please keep in mind that the SNS has no afferent nerve fibers and can not get sensitive by itself [23]. So the pain may arise from a dysregulation from the SNS with the tissues it supplies (for example blood vessels) [24].
However some patients may do not present with both: odd feeling in their hands and head/neck-pain. For example a patient could have only changed sensation in his hands which could be related to the spinal levels T1 – T9 [5]. This is why Evans already suggested in 1997 to rename the T4 syndrome into „upper thoracic syndrome“, which hasn’t been reflected in the literature yet [6].

In the picture you can see the close relationship between the thoracic sympathic ganglion and the thoracical spine [22].

Ok and what is new about the T4 syndrome?

At the beginning of 2017 Karas and Pannone published a review, highlighting the T4 syndrome [7]. They found only 1 randomized controlled trial (RCT) , 2 case series and 8 expert opinions (4 of 8 described in a form of acase report). So after 31 years since the first description of the syndrome, we can only find on1 RCT and some case reports. In the RCT from Jowsey and Perry they present the first evidence that a mobilisation of the thoracic spine has an influence on the activity of the SNS in the hands of the participants (measured by skin conductance). This does not only support the theory behind the T4 syndrome but also supports the concept of being able to influence the peripheral sympathic activity. The case series and case reports have a lower evidence level than the RCT by Jowsey and Perry but they also support treatment modalities to the thoracic spine to reduce the symptoms of patients suffering from a T4 syndrome.

How can i diagnose the T4 syndrome in my clinical setting?

Karas and Pannone also had a look on how the authors of the case reports and case series made the clinical decision that their patient experience symptoms due to a dysregulation of the sympathic nervous system of the thoracic spine [7]. The authors state that it seems like there is actually no valid diagnostic test for the T4 syndrome and the hypothesis has to be confirmed by the whole clinical presentation of the patient. In the following table you can find ideas for your clinical reasoning process to identify a T4 syndrome: 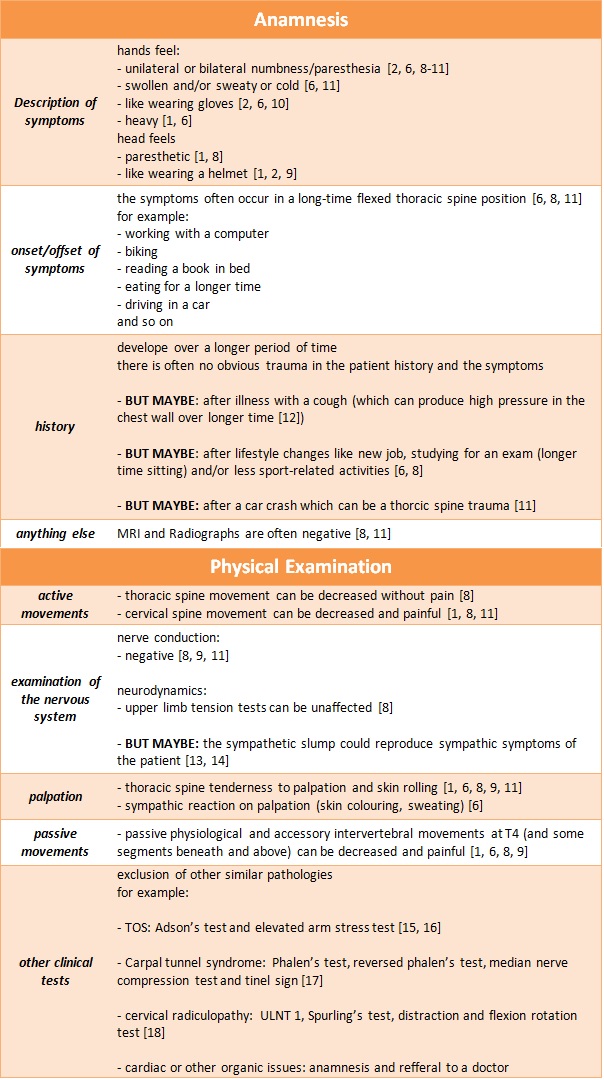 I think my patient could have a T4 syndrome, which therapy should i apply?

Although that not every mechanism behind the T4 syndrome is clearly understood, patients with symptoms according to this condition show a good response to manipulation/mobilisation techniques, exercise therapy and posture correction/patient education [2, 6, 8, 9, 11]. The longest follow-up showed a complete resolution of symptoms after 6 months.

I would like to divide this part into this 3 aspects of physical therapy: passive treatment, active treatment and overall management.

This was the most common treatment used in the case reports. The therapists chosen different types of mobilisation to reduce pain and sympathic symptoms of the patient. Here are some ideas of possible mobilisation techniques that could be used in this case: 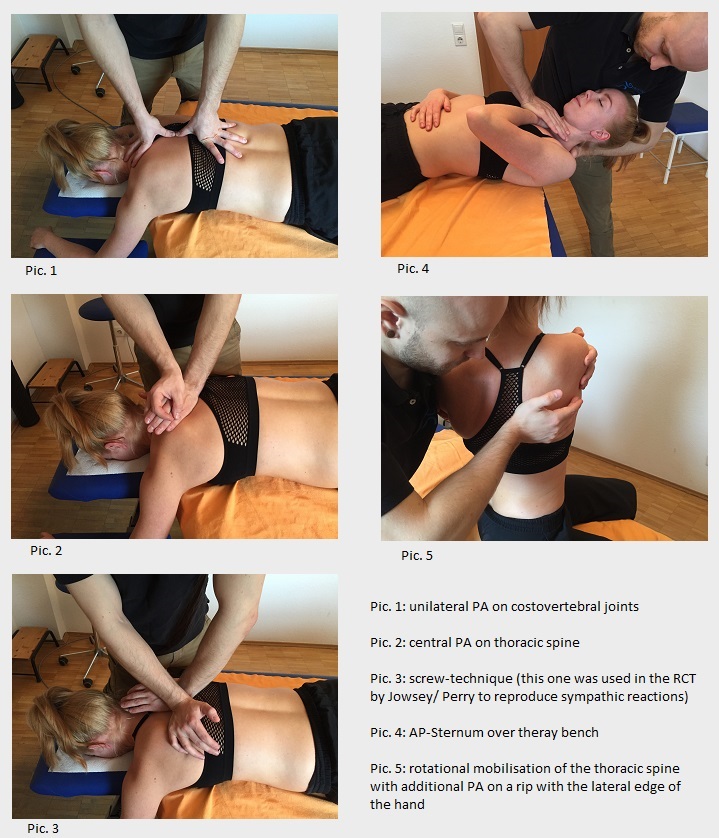 Different types of exercise interventions have been used in the case reports. In my opinion, the exercises should be examination-related, should fit in the daily life of our patient and should be goal-oriantated. If you have the impression that your patient needs a mobilisation and could continue this therapy on his own, give him some mobilisation exercises. If you have the impression that he has a lack of muscle strength, advise him some strengthning exercises. 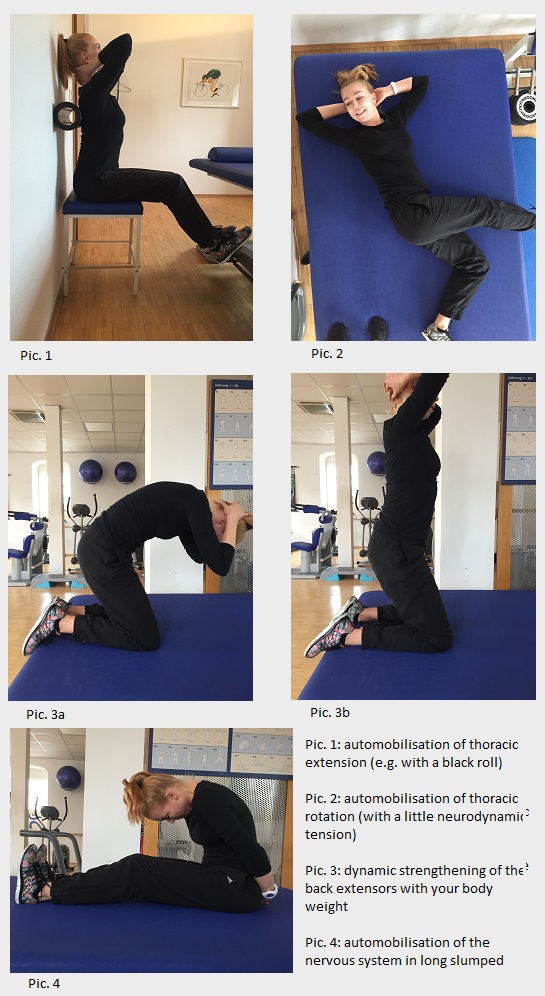 The next sitting posture is always the best!

Zemp et al. published an article in 2016 about sitting posture and back pain [21]. They recognized a relationship between back pain and a static sitting posture. So we should educate our patients to change their sitting posture more often instead of trying to sit upright or being slumped most of the time.

We can also try to improve the patients ergonomic situation when her or his symptoms occur. Maybe adding an extra pillow while reading a book in the bed, changing the adjustments of the chair in the car or optimize the setting of the computer at the workplace. I am sure you already have some of your patients in mind to change a little thing in their daily life 😉

There is a lack of studies about the T4 syndrome but the existing articles support the idea of the possible pathoanatomical mechanisms and the treatment options. It is thought that the T4 syndrome is a complex autonomic sympathetic dysregulation with its origin in the upper thoracic spine. Patients can have different symptoms in their hands, headache and also thoracic and/or neck pain. Actually the T4 syndrom can be diagnosed with a complete clinical examination by excluding other health issues. The therapy can consist of passive and active treament modalities and an overall management including patient education.

Thank you for reading and let us know if you had clinical success with this tips.