Musculoskeletal therapy (NMT) or better neuromusculoskeletal therapy is given an IFOMPT seal in most countries. As a specialized form in physiotherapy, it has a clear competence profile and therefore has a special place in the healthcare system in most countries (www.ifompt.com). In the last decade, the NMT has made a significant paradigm shift. Dominant “hands on techniques” have been replaced with modern “hands of” therapy models, like explain pain explanation/ education as well as cognitive behavioral strategies from the social sciences and the increasing demand for therapy evidence (external evidence). There is a visible split in the professional group that can be noted and might, in my opinion, be classified into 5 groups:

• The traditional oriented physiotherapist with good manual skills; which are based on the models of the first gurus like Grieve, MacKenzie, Kaltenborn, Evjenth, Maitland, Mulligan, Paris etc. Because they are mostly convinced that their models/ therapy has the best outcome, they do not need external evidence and they attend to reject changes (content of therapy- education , terminology etc.). Advertising of their thoughts is important but social media does not make sense and is seen as overpowering.
• The (young) academic physiotherapist: likes to refer to research and is also critical of any outcome of the therapy. In addition, s/he clearly states her/his opinion in group discussions on social media. Finds the classic manual skills less important because of the lower evidence level and has little or no feelings towards the traditional gurus.
• The research physiotherapist: good at mathematics and loves numbers, employed at a University, gathered little or no clinical experience, but puts his/her energy in (clinical) research, working towards their PhD qualification.
• The somewhat confused physical therapist: who has a traditional education and knows one or more gurus and recognizes the paradigm shifts. Does not know how to handle it, but knows that both the “traditional “and the “new wave” can be beneficial. Most of the time, s/he can no longer identify well with today’s physiotherapy. S/he is sometimes frustrated and might tend to “burn out”.
• Minor critical but satisfied physiotherapist: usually agrees with everything and learns superficially. Take different courses, implements the tricks s/he has learned. Does not engage in difficult professional discussions, make a satisfied impression.

These 5 profiles are deliberately described a bit in black and white. In each country, they may vary and everyone knows colleagues who fit into these profiles and …. in which profile do you find yourself? Maybe we have a little bit of all 5 at some times  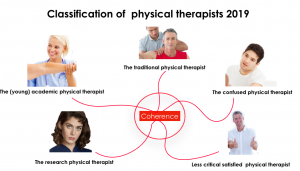 Coherence
The danger is obvious that this split will be larger if a colleague sticks to her/ his traditional or her/ his convinced attitude, ideas or has no opinion of her/ his profession. Transparency, clear statements as a person or as an organization (education and/or political) are, in my point of view, a common treat to maintain or improve a healthy coherence within the profession. Therefore, special attention should be paid to the following points:

• Respecting and embracing the clinical gurus of the first hour but not idolizing them; putting them into perspective and, if necessary, criticize them in a contemporary way, as we do or have done it with our personal gurus (e.g. our parents).
• The current scientific, mostly young gurus, accept and incorporate, meanwhile positively criticize and drive with research questions coming from the clinical field. Both areas need each other and have the same goal: professionalization of musculoskeletal therapy and by that, better patient care.
• Embrace innovative issues in musculoskeletal therapy but find out more reliantly through systematic research and consensus whether novelties such as, for example, cranial mobilization, kinesiotaping, facial techniques, dry needling (not in Germany but in other European countries) are or are not part of musculoskeletal therapy.
• Critically question and possibly redefine specific musculoskeletal terminology. IFOMPT is the leading organization here and has already set the starting signal. Nationally, working groups may support this.
• Responding to the wishes and needs of the current generation of young physiotherapists (content curriculum and adapt the way of communication). That means: renewed marketing concepts at different levels (especially using social media as an advertising platform).
• Systematically integrate science into physiotherapy and musculoskeletal therapy education. This should be divided into two distinct categories:
 Conscientious science: learning to understand science, interpreting according to (own) needs and thereby developing one’s own therapeutic action; constructively criticize existing concepts and phrase research questions.
 Active Science: exploring active clinical research in Musculoskeletal Therapy, publishing and presenting international research outcome.

Assessment and treatment of the neuromusculoskeletal system is a specialized form of (neuro) musculoskeletal therapy and IMTA is a worldwide organization providing education in this domain. In my opinion a modern teacher organization should slowly change his internal organization which may to an optimal coherence described as above

IMTA and the points of attention
Gurus in manual therapy driven by the principals of Geoff Maitland but also from associated manual therapists like G Grieve, D Butler, L Gifford , B. Edwards , M. Jones, S. Sharman etc have been stimulating personalities, who have strongly influenced the IMTA training as it is now. These gurus are embraced but has also be criticized and updated. External evidence is possibly integrated but also this (external evidence) is again critically reflected. Clinical phenomenon’s and outcome believes we see in daily clinical practice has to be in an optimal balance with extremal evidence which have to be implemented by IMTA teachers during education

IMTA ‘s implementations of the future
In the annual meeting of 2018 and the educational days 2019, the IMTA organization is moving . A new internal organization with 3 sub commission (Board, Business Center and Education Committee ) is installed, modern digital learning instruments will be exposed and the most members are convinced supporting research which may lead to maybe a third sub commission with a budget “the research Committee” . In my opinion the IMTA organization touches the qualities of coherence as described above which may be the first fundamental changes to a modern teacher association in musculoskeletal Therapy . I am looking forward to the future 