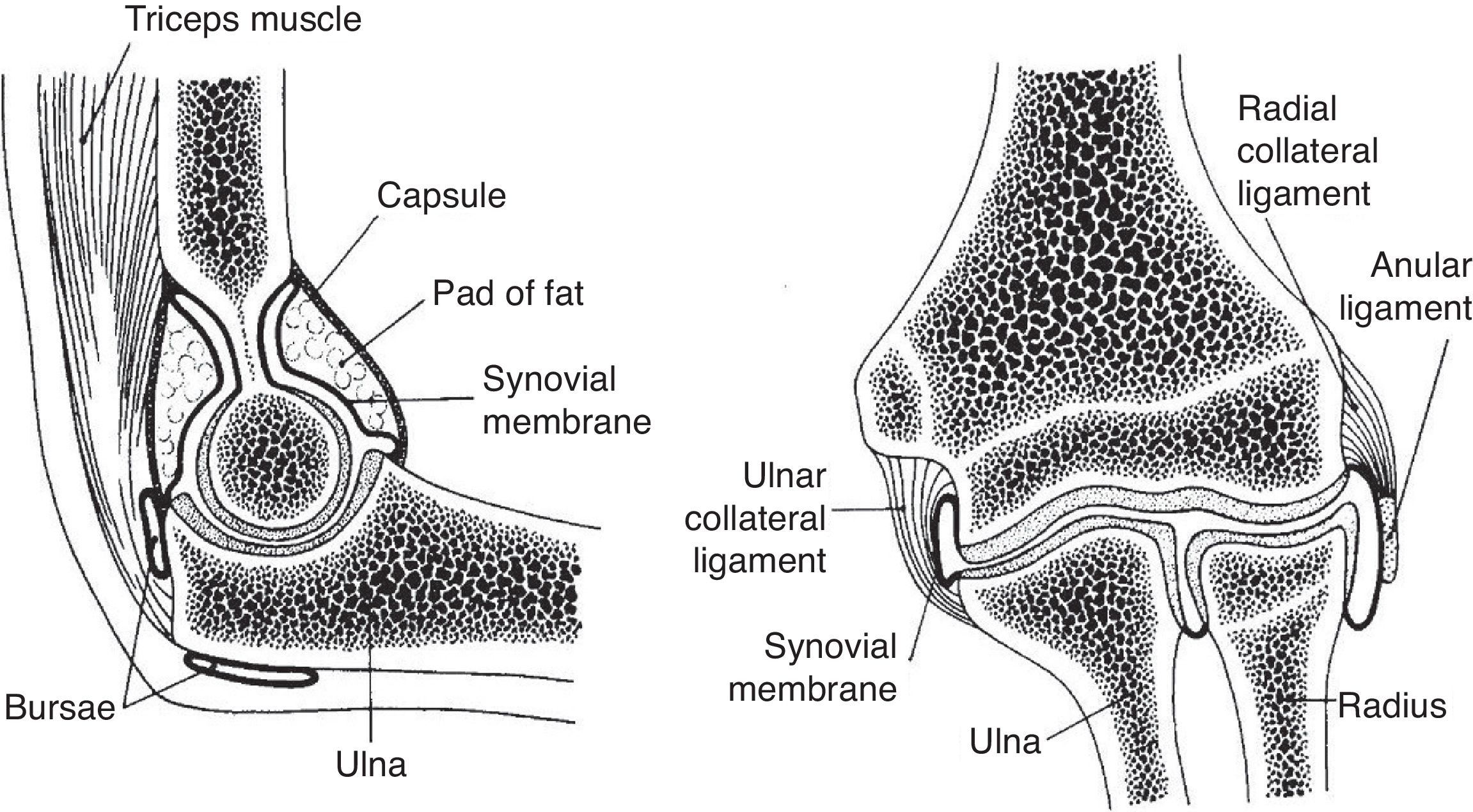 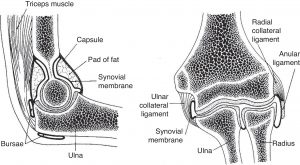 Lateral elbow pain and movement dysfunction has been subject to a great amount of studies with a wide variability of produced results (5,9). A vast number of local structures and local biomechanics have been accused of being the potential peripheral, structural, driver of symptoms, either through ultrasonographic differentiation (17) or through other means of instrumental investigations (17, 18, 19, 20):

-Degeneration of the lateral elbow recess 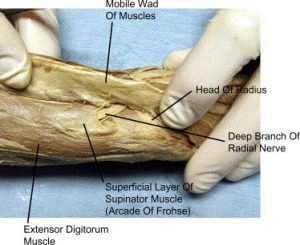 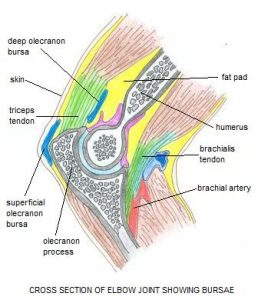 Besides local structures more remote areas and remote structures have been mentioned to be involved in referred or irradiated pain into the elbow as well as comorbid pain areas and may influence the rehabilitation approach (21).

One of the first and probably main difficulties in trying to identify neuro-musculoskeletal drivers of lateral elbow pain is the fact that central sensitization is suggested to be involved in lateral elbow pain (1,5,6,7,8,9,11,13,14,17). Anatomical representations of single anatomical structures in the central nervous system are poorly represented if at all (4). Functional and coordinated components of position and motion are not the muscles and joints, but movements and performed actions (4) and motor units are more represented by behavioral tasks rather than by motor nuclei (2,3). A number of patients identified as having clinical profile for lateral elbow pain with structural alterations also exhibited evidence of altered pain modulation and therefore a profile which suggests poor prognostic indicators (5,9). This requires alertness for reasoning in two directions; peripheral or structural reasoning if the clinical picture forces us to reason at musculoskeletal level (history of recent trauma or overuse) but at the same time raised awareness of possible contemporary central modulation which takes us away from searching a peripheral driver).

Several myofascial structures are thought to blend with the lateral ligamentous complex and are described by the dutch anatomist Jaap van der Wal; “Most of the collagenous fibers in the proximal lateral cubital region appear to be interposed between skeletal tissue and muscle fascicles, therefore no separate entity such as a collateral radial ligament could be demonstrated”. The same situation appears to be true for the annular radial ligament, in fact, the so-called annular ligament does not exist; it is an integrated part of the aponeurotic layer of connective tissue via which supinator muscle fibers insert to the lateral epicondyle (4).”

The anatomical observations made by Van der Wal using a connective tissue “sparing” type of dissection allows us to have a different look on previously described anatomy and highlights anatomical interconnections between several myofascial layers and so-called ligaments, this seems to shed a different light on presumed clinical capacity of differentiating singular tissue’s using a movement at the elbow. 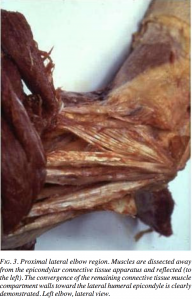 The above picture is from the article of Jaap Van der Wal, 2009 and shows convergence of connective tissue surrounding muscles at the lateral epicondyle of the elbow.

The pictures below show the blending of ligaments around the elbow complex. Variations of ligamentous architectural orientation have been previously described in literature (10). As well as several anatomic variations in bony and ligamentous structures around the elbow. The dotted arrow indicates the radial collateral ligament and the solid arrow indicates the lateral ulnar collateral ligament, the bracket indicates the annular ligament. (note the blending of all three ligaments) 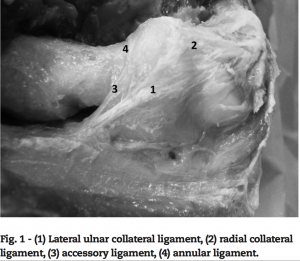 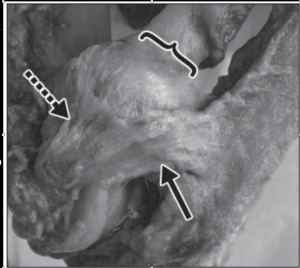 Connective tissue and fasciae are richly innervated, fascial layers may thus play an important role in proprioception and nociception (4). This makes structural differentiation based on clinical examination very challenging.

– Central sensitization is a potential mechanism behind lateral elbow pain. This makes the search for a distinct peripheral driver foremost obsolete.

– In case of a peripheral driver, anatomical blending at the elbow of a great variety of tissues with consequent multi-structural involvement during loading makes clinical selection of single structures extremely difficult if not impossible.

– Most symptom provocations, even if reliable and consistent, are not necessarily pathognomonic for any particular anatomical tissue.

– As previously reported in one of my blogs on structural differentiation, mechanical loading and symptom provocation is not an infallible indication of location of the pathological source and structural interpretation should be undertaken with great care, not only at the elbow

– Rehabilitation should be based on extensive examination of potential biological as well as psychosocial contributors to lateral elbow pain. Hypothetical -deductive reasoning and careful, individual and goal orientated, planning of rehabilitation in concordance with the patient is mandatory.