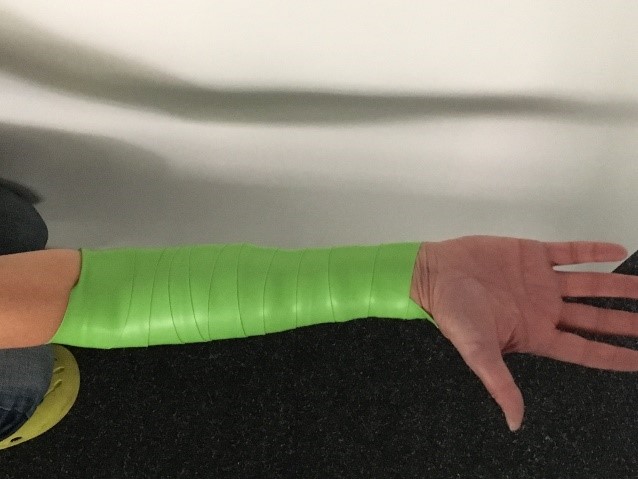 Has it got something to do with cleaning your teeth? – no –

Has it got something to do with SUP (stand up paddling)? – no –

Has it got something to do with diving? – no-

Has it got something to do with physiotherapy? – Yes, it has!

In the past 2 or 3 years “flossing” has appeared as treatment modality in Germany (Physiopraxis 9/2015). In the United States it is known as „voodoo flossing“, based on ideas of Dr. Kelly Starrett (2015)

When I first heard about this new therapy named flossing, I thought „ another useless tool to kid the patients“ easy technique, quick, no background, just a try. After looking a bit behind the scenery, it may be a therapeutic tool, like other things such as kinesiotape, black roll and so on. Embedded in a sound clinical reasoning procedure flossing could be a tool, like other manual therapy approaches, which may help to get the patients back to normal function and back to normal movement. So I will try to figure out how it can be implemented in the maitland®concept.

The main effects of flossing seem to be a reduction of the pain level and an increase of range of motion (Ahlhorn et Krämer 2016, K. Starrett 2015). The scope of flossing is limited. There are only a few joints and body areas, where flossing is possible. Training with flossing tape applied is limited to 3 to 5 minutes. Training can be active or passive. The body part most suitable for flossing seems to be the knee joint. Flossing tape is wrapped around the limb from proximal to distal using an overlapping technique. Flossing experts suggest that the application in the opposite direction, from distal to proximal, would have more influence on lymphatic drainage

The conclusions from Melzack and Wall, Loenneke, Stecco, and Crossley help to underline their hypothesis. 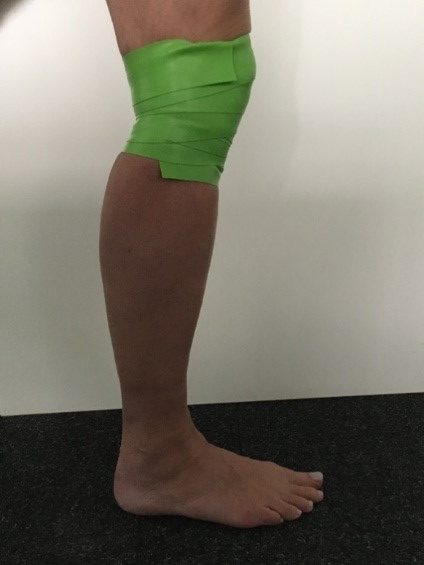 Taking a critical look at the application of knee flossing it would seem that the decrease in pain levels may be due to the compression of the patella femoral joint during flossing (Page et al 2011, Crosley et al 2000). Furthermore a displacement of joint surfaces similar to an accessory movement may result from the application of flossing techniques. The tibia may be displaced anterio-posteriorly or transversely for example. Torsion of the tibia against the femur may also follow the application of flossing tape. Or the highly innervated Hoffa pad may react favourably to the mechanical input.

Looking at ankle flossing the influence on the position of the tibia or talus can be compared to Mulligans techniques and may help to explain flossing success. (Gilbreath 2014).

Loenneke et al`s  meta analysis examined training under blood flow restriction. They looked at various types of exercises under low load (30% of forces). The found an increase in muscle strength. Although they didn` t use flossing techniques, this study may provide a basis for discussion.

Like most other therapeutical interventions, the gate control theory could provide an explanation for the pain reduction (Melzack and Wall 1967). The strong band that is wrapped with considerable force provides an intense mechanical stimulus.

A fascia based explanation 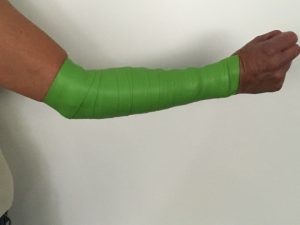 (Gumberteau et al 2010) concerns to the idea of breaking off cross links. The fascia of the thigh, the fascia lata, popliteal fascia, crural fascia, antebrachial fascia and brachial fascia are covered during all described applications of flossing (Stecco et Macchi et al 2009).

I am not a specialist in lymphatic drainage but it seems to me that too much compression force is used for a useful lymphatic input. An idea of increased venous drainage as a consequence of flossing seems more feasible to me. The application of just 3-5 minutes does however seem to be too short.

The development of a thermal stimulus has been demonstrated during active exercise under the application of flossing tape (Ahlhorn et al). Blistering has been seen after removing flossing tape. This is most probably the result of heat development due to increased frictional forces. Many years of experience have shown us that muscle relaxation follows a thermal stimulus and thermal agents are often used during physiotherapy. (Thüler 2003 )This could also be a part of the explanation of the therapeutical effect of flossing. 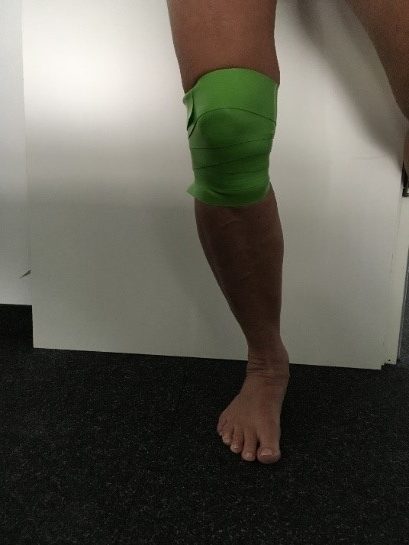 As teachers of a manual therapy concept -the maitland®conept-  we are often faced with students asking our opinion about various techniques. Luckily we have been trained in a „concept“. Our idea of clinical reasoning allows every „strange“ ideas to be part of a therapy plan. Flossing does seem to be one of these strange ideas but some aspects do sound acceptable and are easy to try with patients. Although, as so often, appropriate studies in this field are still missing there are a few points concerning the effectiveness of flossing that might be explainable by evidence.  Therefore if it is embedded in a logical clinical reasoning process, flossing could be a reasonable “add on”.

This prompted me to look in to flossing a little more closely. I had the chance to talk to Andreas Ahlhorn, one of the founders of medical flossing, and author of the book: Flossing in Therapie und Training (Ahlhorn and Krämer 2016)

He answered a few questions based on the ideas explained above. In his opinion the lymphatic explanation seems to be questionable as a malfunctioning lymphatic system doesn`t need more compression. He finds that traumatic or post- operative swelling reacts optimally to flossing.  In fact in Germany a medical clinic is currently testing reactions to flossing directly after knee operations. Mr. Ahlhorns explanation for an increase range of motion and pain relief is the “sponge” effect. The application of flossing tape nearly stops venous return and the arterial nutrition is reduced. It leads to compression of the lymphatic system and an increase in intraarticular pressure seems to occur. Thus, a vacuum is creating in tissue. After releasing the tape the vacuum is lost and fluid return to the tissues. This could cause an exchange of waste material fluid.

In his opinion, medical flossing can be integrated into most manual therapy concepts. The flossing team doesn`t teach special techniques for the application of flossing band. „Trial and error“ is not, however, their philosophy, it’s much more a “try- verify and change- if- applicable” approach.

I would be interested to hear about your opinion and experiences with flossing and whether flossing can be integrated into modern manual therapy.